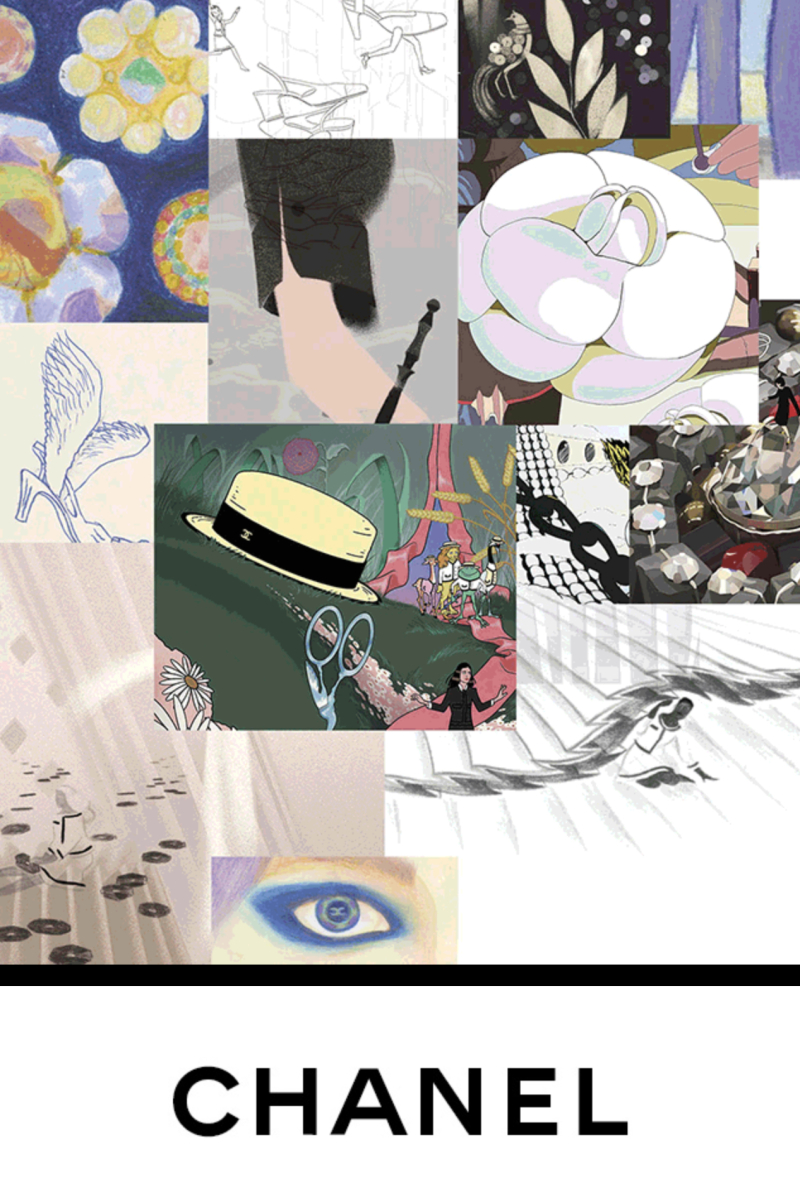 The film of the show will be revealed on

CHANEL invited eight authors to celebrate the wealth and diversity of the Métiers d'art in residence at le19M. On entering this new space dedicated to fashion’s historic and unique savoir-faire, the writers Anne Berest, Lilia Hassaine, Nina Bouraoui, Salomé Kiner and Sarah Chiche, the author and composer Clara Ysé, the musician and writer Abd Al Malik as well as the artist MC Solaar discovered the magic of the Métiers d'art along with the ateliers, the gestures, the vocabulary and the history of these Houses. Eight texts emerged from their visits: intimate stories, micro-fiction, poems, a letter and the free association of memories, all pay tribute to this exceptional artisanal heritage, for which le19M provides an equally precious showcase. 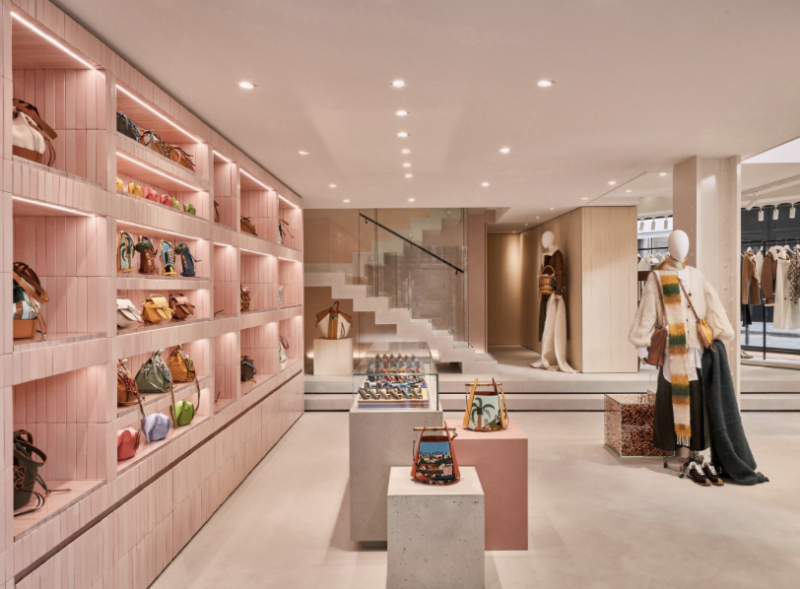 The pandemic inspired designer Jonathan Anderson to create a spellbinding alternative to the runway: shows in a box for Loewe that are as fun to play with as they are artistic — and collectible. (Two “gently used” ones are listed on Grailed: one at $500 and another at $30,000.)

The designer also has strong ideas about how fashion boutiques must change.

“Going forward after this pandemic, I think retail will have to be about unique discoveries, it must become more personal,” he told WWD as Loewe readies a striking new store on the Rue Saint Honoré that showcases monumental paintings, vintage furniture, and ceramics by Pablo Picasso, the latter encased in glass cubes. The store, whose architect was Paula Aza Custodio, opens Saturday.

“Through the curation of art, each store has its own unique voice and when you go to stores, they need to be about discoveries,” Anderson said, calling the new unit “a very personal” project. “All the objects are curated. I worked very closely with the in-house architect, Paula, on coming up with solutions on how to create novelty within a space that is not permanent.”

The sharply angled corner unit, with its floor-to-ceiling windows, is something of a fishbowl, which Anderson used to full effect.

“You are seeing layers as you look through the window,” he said. “It is almost as though you were turning the store into a TV set and stepping into a different world.”

Attendees of Loewe’s fall 2016 fashion show might recognize some of the glass cubes scattered about the main floor: one filled with small lightbulbs; others with copper tubing, feathers or colored sand. These were used for seating at the UNESCO display, and here are repurposed as plinths for leather goods — or freestanding sculptures.

Large-scale paintings by Richard Hawkins and Patricia Leite are mounted on large panes of glass, giving visitors a glimpse of the frames from behind, showcasing woodworking skills in tune with Anderson and Loewe’s fascination with craft.

Visitors weave their way between the cubes and panes of glass that are mounted on concrete blocks — all potentially moveable parts to construct pathways to discovery. The layout invites zigzagging through the space: past a hulking shelving unit of rustic pink tiles with nooks for handbags, a high-back Arts & Crafts wooden chair by Harry Napper occupied by an animal-shaped leather pouch, and a triangular nook for ready-to-wear.

A concrete staircase leads shoppers up to a mezzanine level appointed with a vast and colorful carpet by textile designer John Allen, a vintage library lounge chair, more rtw, eyewear, footwear — and those Picassos, which are not for sale. Here, one can take in almost the entire main floor, vibrant with color and texture.

Anderson said the materials — among them pine wood, ceramics hand-glazed in Spain, and Marmorino, a type of plaster — telegraph his and Loewe’s commitment to craft.

“This is the first time we have had Picasso ceramics in the store and the nice aspect of it is that it transmits this idea of Spain and how Picasso became such a pioneer in terms of craft,” the designer enthused.

Loewe is one of the fastest-growing fashion and leather goods brands at LVMH Moët Hennessy Louis Vuitton and the Saint-Honoré location is in addition to the brand’s historic store on Avenue Montaigne.

Loewe’s footprint in Paris, compared to other fashion capitals, was not yet at the level of Loewe’s growing influence, so increasing our visibility there was high on our priority list,” said Pascale Lepoivre, Loewe’s chief executive officer. “We will also open a beautiful space on the ground floor of Le Bon Marché early next year.”

She said the new women’s boutique “expresses exactly what will continue to engage new generations of customers: thoughtful, young-hearted luxury combining thoughtfulness and play, experimentation and a passion for well-made things.”

The 1,700-square-foot store, previously occupied by Dior and before that John Galliano, now sits in the shadow of hulking flagships by Dior and Chanel.

Lepoivre said she relishes being in such good company: “We are thrilled by the fact that this corner has such great visibility. We think Loewe will bring something fresh and exciting to an already brilliant mix of beautiful stores.”

The new unit brings to 123 Loewe’s global store count, and Lepoivre characterized freestanding stores as a key pillar in the company’s strategy, while acknowledging the steep drop in tourism in many cities.

“We are definitely pursuing the strategy, with some planning adjustments of course, as well-located, freestanding stores are key to introducing our full-fledged collections to local clients, and because they also play an essential role in the deployment of omnichannel sales and services,” she said. “By focusing on local markets all around the world, we have been able to rebalance our merchandise and adjust the depth of our stocks with a certain success. Now that we are reaching the year end, we will finish widely positive on last year in several countries and regions.”

Loewe shifted some retail projects to 2021, but maintained plenty of store openings this year including Munich in Germany, Kunming in China, Dubai, and Singapore, as well as seasonal locations in Saint-Tropez and Ibiza.

Like many luxury brands, Loewe has shifted its focus to “working very closely with our local teams, listening to their requests, suggestions and needs, which can sometimes be very specific to a local culture or consumption behavior,” Lepoivre said. “We learned a lot from the crisis and this approach will definitely be maintained in the long run.” 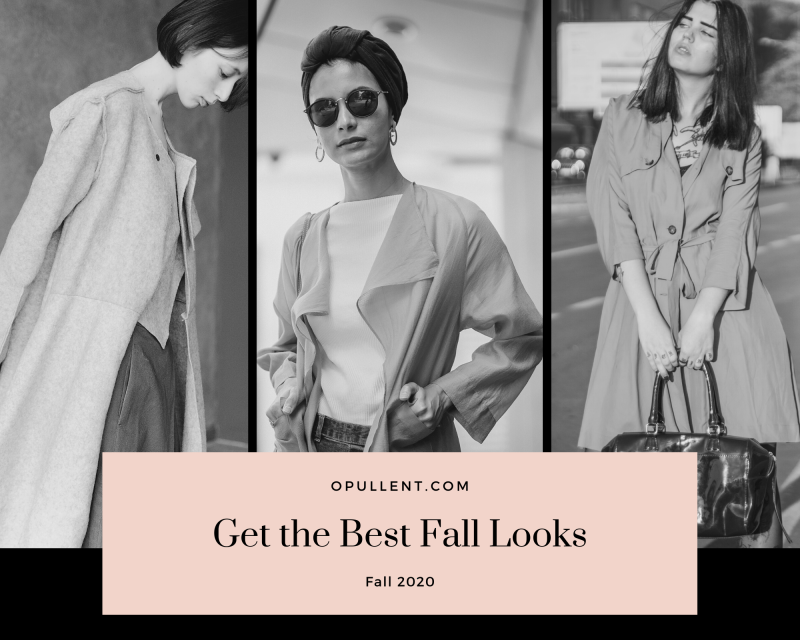 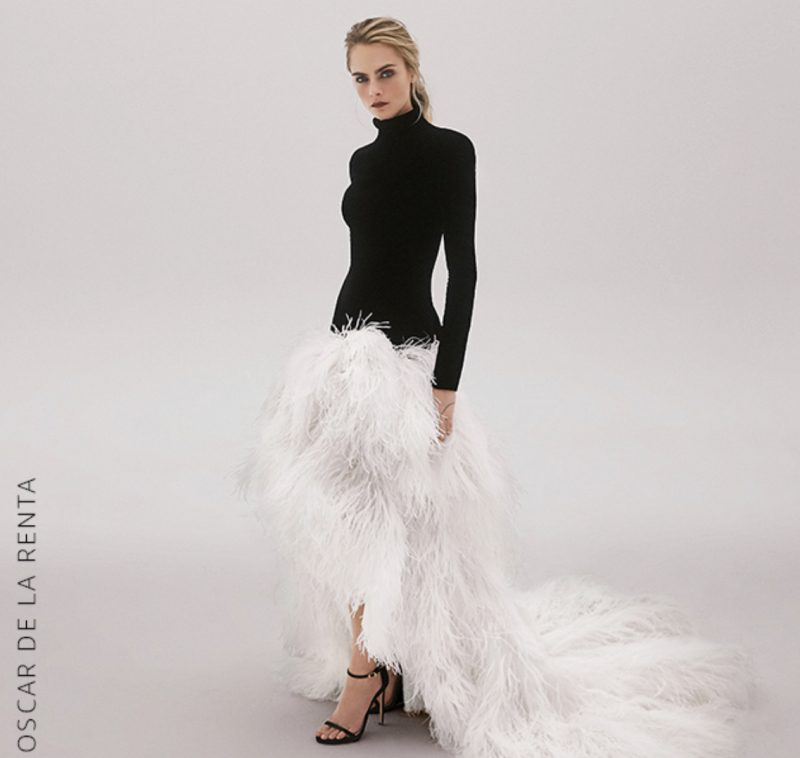 Amazon launches Amazon Luxury. Starting as an invitation only via the mobile application, designers such Oscar da la Renta and La Perla are available as well as many more. 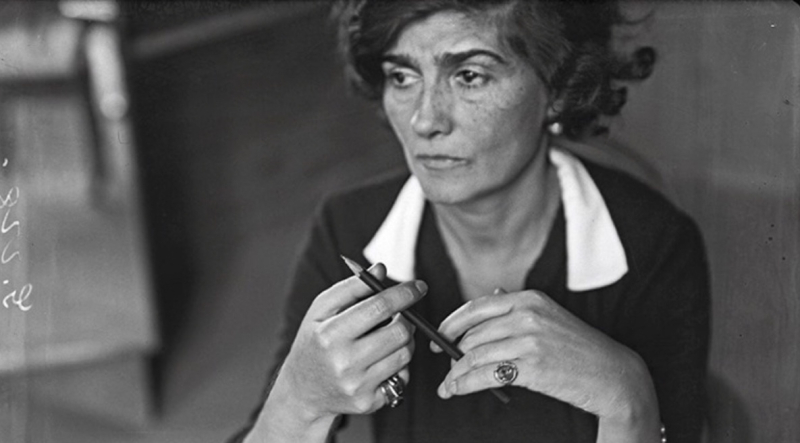 Gabrielle Chanel: Fashion Manifesto a retrospective that explores the enduring style signature the designer forged, and to the extent to which her and her brand was one of the same. Opens October 1st at the newly renovated Palais Galliera. (via vogue.com) 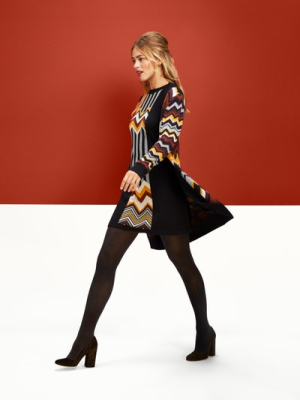 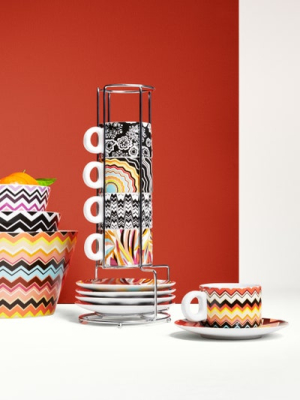 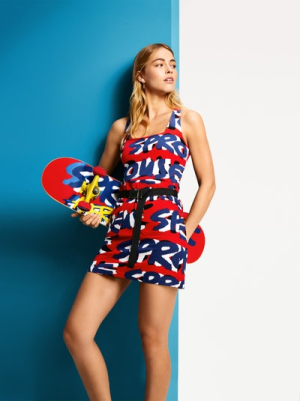 Louis Vuitton has announced the appointment of Johnny Coca as the women's fashion leather goods director. The former Creative Director of Mulberry will be working alongside Nicolas Ghesquière to revamp the house's accessories.

Coca most recently headed the design direction at Mulberry, spending five years at the iconic brand which is famed for its handbags. Before this, Coca worked with Phoebe Philo at Céline and under Marc Jacobs when he headed up Louis Vuitton. 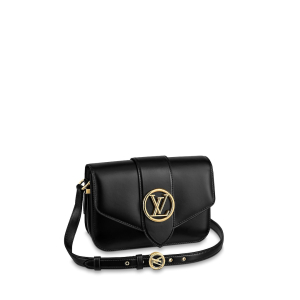 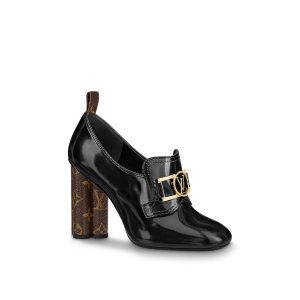 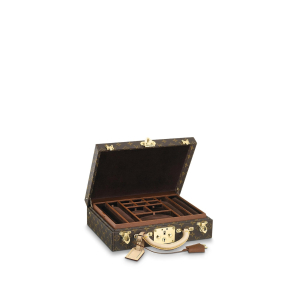 Defined by vivid colors and the ironic captions accompanying her illustrations, Emma Allegretti creates a series of artworks for Gucci Beauty. 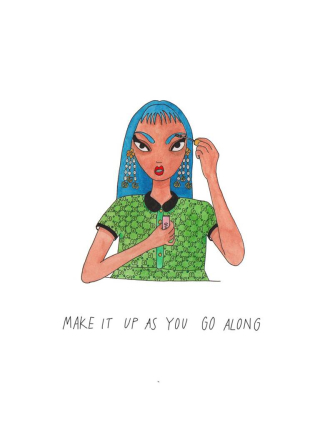 Her Gucci Beauty illustrations,  explain how she tackles social issues through her water-colour art. Read an interview with the artist on Gucci.com. 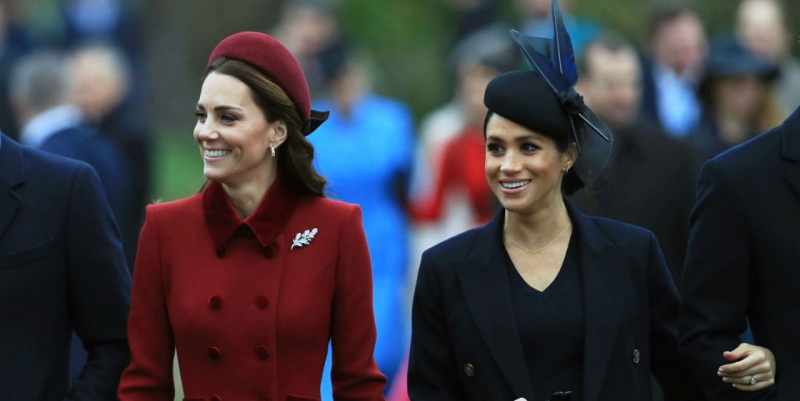 Kate Middleton and Meghan Markle are both fashion icons, but each of the duchesses have their own unique sense of style. At here is some overlap in their wardrobes, however—like their love of wearing espadrilles while traveling...(via Marie Claire) 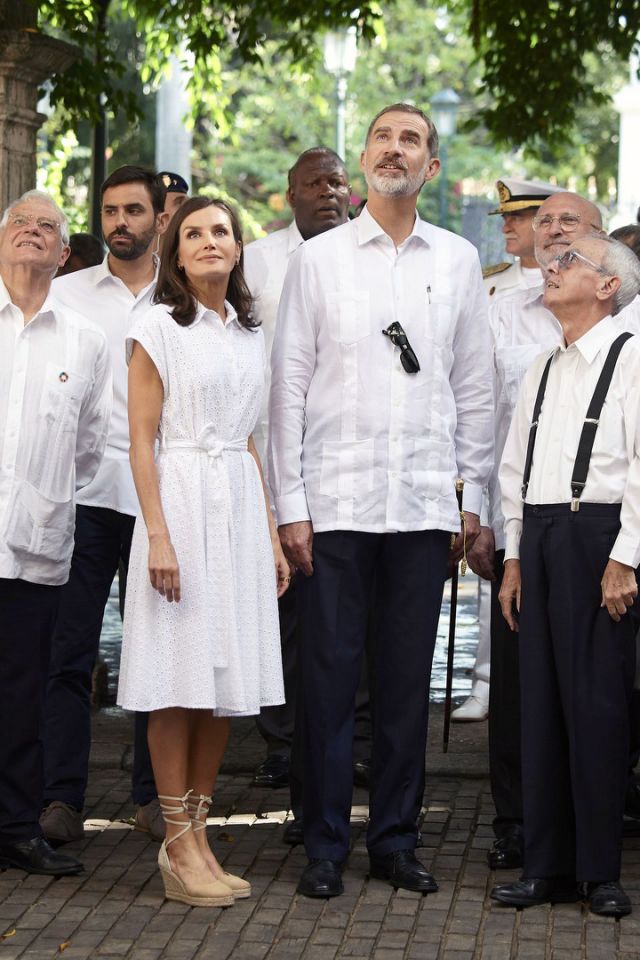